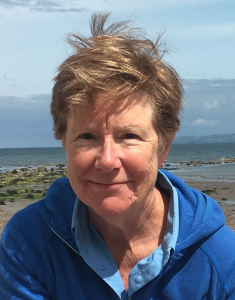 A note from AEDP Founder and Director, Diana Fosha on the occasion of announcing Kate’s addition to the AEDP Institute faculty:

It is our great pleasure to announce that Kate Halliday, LCSW joins the Faculty of the AEDP Institute as its newest member as of February 2020. In addition to her great love of AEDP, Kate brings tremendous dedication, energy and delight to teaching, training, supervision, community building, and clinical work. From early days to now, Kate’s clinical work and clinical interests, evolving from early training in developmental psychology and subsequent professional clinical experiences, has focused on trauma and dissociation, and their repair. She has always had a commitment to serving her own GLBT community, and for the past decade or more she has developed something of a specialty in work with transgender people. A valued therapist in the AEDP research project,  Kate has re-discovered a passion for time limited treatment.

Kate Halliday is also committed to making AEDP accessible and affordable to clinicians in local regions, which are far removed from urban centers. Kate has built a thriving AEDP community in her own  region, Ithaca, NY. The AEDP Finger Lakes Regional chapter, which now regularly hosts AEDP events and activities, including day-long retreats for its members on such topics as Exploring the impact of marginalization on ourselves and our clients; Repairing the effects of trauma and neglect; Core State and spirituality in AEDP. Community building remains a primary interest for her, in her local experiments and as she considers how AEDP may be promoted elsewhere.

Both her students/supervisees and her colleagues are impressed by her leadership, appreciate her many qualities and see her as someone who is wise, thoughtful and impassioned; someone who embodies kindness, compassion and unflappable organization; someone “with a unique blend of gifts with a wickedly smart and funny left brain and a powerful right brained capacity as well.”

We are proud to have her join us and look forward to her contributions as a faculty member.

Kate Halliday, LCSW is a psychotherapist based in Ithaca, New York and a member of AEDP Institute Faculty since February. 2020. She has been in private practice since 1998 after a number of years in community human service agencies.

Over the course of a long career, Kate has been influenced and enlivened by a wide variety of experiences and teachers. She began her career as a nursery school and elementary school teacher, and went on to train as a clinical social worker. A writer and a pragmatist, she was initially drawn to Solution Oriented and Narrative therapy. A longing to feel more effective in treating trauma led her to train in EMDR in 2000; and in 2009 she began learning AEDP. Like many in the AEDP community, Kate fell in love with the model from the first moment when she saw Diana Fosha present a videotape, and in the years since Kate has enjoyed every moment of AEDP-related experience.

After several years of assisting in Essential Skills courses in New York, Kate realized that her longing for more ongoing lived experience of AEDP might happen by building an AEDP community where she lives in the Finger Lakes region of New York State. So Kate began offering AEDP training groups to local clinicians there in 2015, and she was delighted that this project has taken wings. There are currently three ongoing groups studying AEDP with her, and she also has several supervision groups running. Many of the clinicians who came to AEDP through Kate’s classes have gone on to attend Institute trainings in the US and abroad, and some are even joining her as Experiential Assistants in teaching the Essential Skills classes. Kate’s original commitment was to make AEDP accessible and affordable to clinicians in her local region which is far removed from large urban centers. This remains a primary interest for her as she considers how AEDP may be promoted elsewhere.
The now thriving AEDP Finger Lakes Regional community has a lively and dedicated committee who work as a team to invite and host events for other AEDP presenters who are willing to make the trek into the interior. Participants are drawn from as far away as neighbouring states and across the Canadian border. Every few months AEDP Finger Lakes convene as a community for day-long retreats to explore issues and skills in depth. Recent retreats include:

Kate’s clinical work, evolving from early training in Developmental Psychology and subsequent professional experiences, has focused from the beginning on Trauma, Dissociation, and their repair. She has always had a commitment to serving her own LGBT community, and for the past decade or more she has had something of a speciality in work with transgendered people.

Kate currently supervises both in her office and over Zoom. She’s been pleased to discover that the process of remote meeting turns out to offer most if not all of the emotional intimacy and efficacy of in person sessions. Especially for those of us in far-flung locations, online supervision and even therapy offer opportunities for personal and professional growth (and delight!).

Kate’s sensibilities and temperament were formed by and in reaction to her childhood in a Scots family who lived in southern England. A sense of the privilege and alienation of having an outsider perspective followed her to the United States, where she settled as a young adult. Other formative experiences include: five years at a rigorous and spartan boarding school; being flung from there into an American academic setting with entirely different rules; early initiation into the delights and complexities of single parenthood; having both parents die extremely young; coming out as a lesbian when it was not certain that she would not lose her children in a custody battle; successive approximations of romantic relationship until finally maturity and good luck bestowed the love of her life upon her; having her children evolve into good friends; designing and building a house on land that feels as familiar to her as the skin of her own body; ageing and learning to love deeper and wider, so that death will not be a disaster.

Kate has been exploring Shamanic traditions of healing for 20 years, and what she has learned though her experiences in what is called “non-ordinary reality” informs and sustains her. A deep relationship with the natural world is the bedrock of her capacity to meet herself and others.

To learn more and to contact Kate see her directory page here.