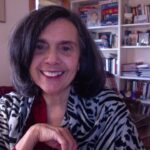 Leonora Lorenzo, LCSW is a License Clinical Social Worker and Bodyworker in Santa Fe, New Mexico.For nearly three decades she has cross pollinated her psychotherapeutic work with various forms of hands on and remote body works, the most well known of those are Biodynamic Cranio-Sacral Therapy and Orth-Bionony; she is a certified practitioner of both.
Leonora made her start in AEDP at the first ever AEDP West offering of ESI, back in 2010.  Since then she has gone on to become a certified AEDP therapist and supervisor.
Other areas of training and study which inform and guide her work include the realms of pre and peri- natal psychology, communications theory and practice, experiential ontology and the facilitation grief rituals as well as accompanying people on their end of life journeys. She loves to laugh and loves comedy, and even tried her hand at stand up, but realized that being a sit-down therapist was more suited to her temperament!
Still she ever inspired by the collective power of Love, Listening,  Laughter, Tears and Life Itself.