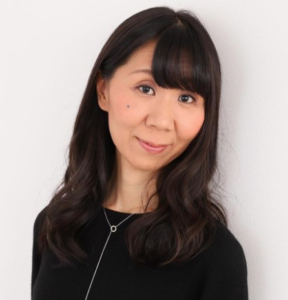 A note from the AEDP Institute on the occasion of Dr. Hanakawa’s promotion to Sr. Faculty:

Yuko Hanakawa, PhD is a phenom: she is not only a full Senior Faculty member of the AEDP Institute, she is a one-woman AEDP Institute in Japan, bringing AEDP in Japanese to mental health professionals in that country.

Yuko’s AEDP in English
Since 2016, Yuko has been co-chair, with Matt Fried, of the AEDP Diversity Committee. This is what she wrote about it: “our efforts as Diversity Committee are bearing the fruits that we have been hoping to see: the depth and width of diversity in race, ethnicity, culture, nationality, sexual orientations, and gender were undeniably visible in the NYC Immersion course. Many people of color – African Americans, Hispanic, and Asian –  spoke to me personally during the Immersion course, and told me that it was the first psychotherapy course in which they are with so many other people of color. One African American woman, who was a recipient of a Diversity Scholarship, shared in the whole group that she felt comfortable because of the cultural diversity in the course, and said that she felt as if “you (other participants) are my people.” This comment beautifully and powerfully speaks to the growing diversity in our trainings.

In addition, Yuko has contributed a chapter on moment-to-moment tracking and embodiment to the upcoming edited book entitled AEDP 2.0: Undoing Aloneness and the Transformation of Suffering into Flourishing. Stay tuned.

Yuko’s AEDP in Japanese
Yuko has written a primer on AEDP coming out this year (2020), which explains AEDP in an easy-to-understand Japanese language with a focus on moment-to-moment tracking and plenty of clinical examples and session transcripts. She is also working on a book about AEDP for the lay public. She has published several articles in Japanese academic journals, and is currently working on another on the emotion processing of emotional pain. She has released an online video (streaming) course that includes basic lectures on AEDP theory and techniques, sixty-eight short video clips to practice AEDP skills interactively (moment-to-moment tracking, identifying emotional expressions, learning units of interventions, etc.) along with short quizzes.

Yuko Hanakawa, PhD is a licensed clinical psychologist in New York City. She was “raised” by AEDP from the very beginning of her career. While a doctoral student at Adelphi University, she met Diana Fosha who was a faculty member. Dr. Hanakawa has been captivated by the unfolding process of healing and growth that AEDP powerfully facilitates ever since.

Dr. Hanakawa has been particularly interested in the body-mind connection, memory reconsolidation, and the role of positive emotions in the process of transformation. Her paper, “Receiving Loving Gratitude: How a Therapist’s Mindful Embrace of a Patient’s Gratitude Facilitates Transformance,” was published in the AEDP Transformance Journal, in 2011.  In addition to being trained by Dr. Fosha, she was in small group supervision with Dr. Jenna Osiason, and individual supervision with Dr. SueAnne Piliero.

Dr. Hanakawa feels passionate about cultivating ethnic/racial diversity in the AEDP community and serves as a co-chair of the Diversity Committee. She is also a member of the International Community Development committee, and has been creating AEDP communities among Japanese therapists in NYC and Japan. Along with Dr. Shigeru Iwakabe, she oversaw the Japanese translation of “The Transforming Power of Affect” by Dr. Fosha (2017); she also contributed a chapter to this book which focused on a clinical case conducted in Japanese.

Dr. Hanakawa was a faculty member at St. Luke’s Hospital where she directed the externship program, and taught and supervised staff and trainees. She maintains a private practice on the Upper West Side of Manhattan, offering in-person and on-line therapy and supervision. Additionally, she is certified in Neurofeedback and Hypnotherapy.  Dr. Hanakawa has presented locally and internationally and has supervised experiential groups in the AEDP Immersion and Essential Skills.

To learn more and to contact Yuko see her AEDP directory page here.